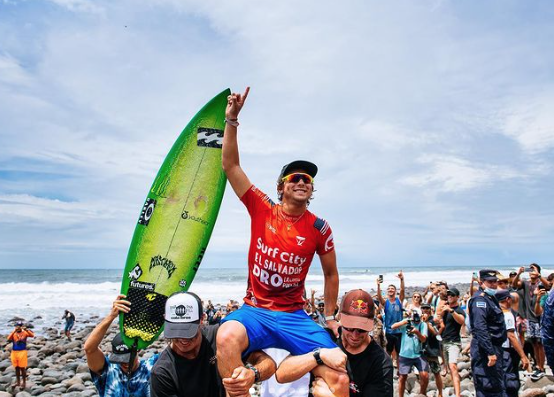 Yes, Hawaii has long been part of the good ‘ol U S of A, but for some reason professional surfers from Hawaii have long been seen as separate from their mainland counterparts.

With that in mind, there hasn’t been a World Champ from the ‘mainland’ US since Kelly Slater won his 11th in 2011 and there hasn’t been a California-born champ since Curren in ’86. Given the sheer number of surfers in the Golden State, and the immensely popular surf culture that has existed for decades, the latter being almost incomprehensible.

There have been a couple of knocks on the door over the years but most of that was hype and hope that simply never materialized. A general malaise of the Californian surfer being the consensus excuse as to why.

Spoiled rich kids, or something.

Well, back at ya as San Clemente’s Griffin Colapinto has pushed his chips into the center of the table with his second WSL CT win of the season in San Salvador. The first coming in Portugal. Both of which were victories over Felipe Toledo in conditions that Felipe has absolutely owned over the last three or four years.

Assuming he can stay hot and indeed make the final five, Griffin will be surfing for a world title at Trestles, his home break.

Griff has been such a breath of fresh air to surfing in general. Not too serious out of the water while having fun with his crew and filmer Cam Jonas, Griff can quickly switch it on when the jerseys come out. And, he and his brother Crosby are a pleasant throwback to years past as they continue to charge on Oahu’s North Shore.

Which, has also been kind of missing lately from many of the Cali crew.

Without a visible weakness in his surfing at the moment and the remaining schedule looking very favorable for Griffin, we think he’s just the guy to bring some order to California pro surfing.

Editors note: Rumor has it that it was a certain Australian pro surfer who’s idea it was many years ago to make Hawaii and the mainland US separate entities in relation to professional surfing.

Watch: “Gold Coast with Mick” From the Cola Bros

Watch: “Margs” by Cola Bros The best vlog on the ‘net right now?