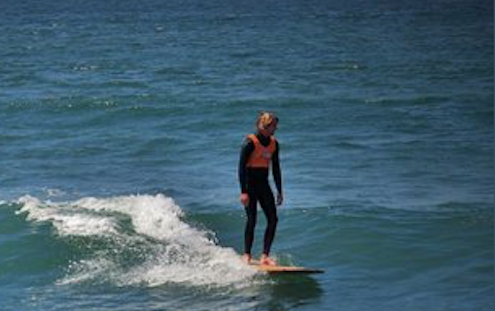 You know it’s been a slow couple weeks when the only thing to talk about is competitive longboard surfing.

But that’s where we at.

If you’ve been following along you may have seen the comically entertaining back and forth between Joel Tudor and the WSL over Joel’s insistence that the WSL is discriminating against longboard surfing. He was using a difficult to follow logic that somehow the equality issue between men and women in sports can and should also equate to shortboard and longboard surfing.

We aren’t going to get too far into the weeds on this as we don’t really have a ‘dog in this fight,’ as they say, and simply because there isn’t a lot of passion in the office for longboarding in general. At least not on the level where we feel showcasing the genre in a competitive forum is anything we are going to lose sleep over if it doesn’t exist.

That said, we do feel some connection to the laidback lifestyle element that many loggers embrace.

We love us some Alex Knost.

Joel too for that matter.

The thing we are having a hard time wrapping our heads around is why the pressing desire from Joel to hitch competitive longboarding to the WSL clown show?

The recent Duck Tape Invitational event in Mexico was what looked like a ball of a time: surfing, playing music, drinking, and generally just having some fun.

Not a Eric Logan in sight.

And isn’t that the longboard lane of preference?

If the Duct Tape events, and their representation of the tribe who participate, isn’t the perfect way to present longboarding then we must be missing something.

Let’s be real here, it’s a niche genre within another niche activity compared to ‘real’ sports, so to think that somehow aligning with the WSL is going to bring instant credibility is simply a bridge too far for us.

We do, however, see Joel and his merry band of funsters doing a traveling festival-style chain of events under the Duct Tape banner and format and putting longboarding out there in it’s best possible light.

Instead of being an afterthought at a few WSL minor league events and mostly non-log friendly locations like Manly and HB, they could hold events at spots that would be surf-appropriate and in communities that would embrace them.

Surely there is a Vans or a beer brand that would underwrite it as it would be something that is actually authentic and way better than any out-of-touch WSL presentation could possibly offer.

With or without Devon Howard.

Yes, they may not get the broadcast coverage, but it doesn’t look like that going to be substantive anyway, if at all.

Opinion: Can surfing have true equality?

Read: An open letter to Erik Logan We aren’t asking much

Congratulations Jack Robinson has qualified for the WSL CT

Freshwater Pro Did you watch?

Did equality kill the​ Mavs event? From the​ careful what you wish for file