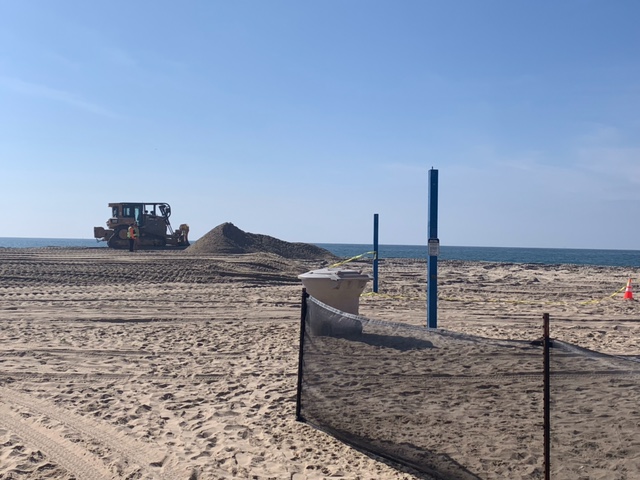 As surfers, we often hear stories about various coastal erosion issues simply because that’s where we roll. But it’s also because we are often witness to the various effects coastal erosion has on our everyday lives in general.

A former WY employee often spoke of the difficulty his parents were having at their Ventura County oceanfront home with the Pacific Ocean slowly but steadily advancing into their property. The powerful California Coastal Commission refusing to let them fortify with any type of seawall or jetty to slow things down.

Which, however, right or wrong, is consistent with the commission’s position on this type of thing. That position being; made-made fortification to stop the ocean’s movements doesn’t work over the long term and often has detrimental effect on the surrounding area.

Ask Kelly how his “burritos” are working out.

But it’s hard to explain that logic to a homeowner who’s watching million of dollars slid into the sea.

If anyone reading this has been to the beloved San Onofre in So Cal lately, you would have witnessed a tragic transformation where what was once a broad, white sand beach is now almost completely gone from the point to the nuke plant.

We’re obviously no experts in down shore ocean currents or any other relevant marine science but it doesn’t take much of an expert to understand that when we mess with certain elements of the natural process there are almost always consequences of which were unintended. How that translates to the situation at Sano we have no idea but we’re pretty sure someone at Surfrider has an educated opinion if you’re interested.

Which brings us to the latest calamity here at home.

The mighty Santa Ana River flows many miles as it winds its way to the sea. Beginning way up in the San Gabriel Mountains above Southern California, you’ve driven next to it and over it a few times if you’ve ever been snowboarding up at Big Bear. Its only major impoundment is the Prado Dam in Chino. From there it runs pretty free – albeit constrained by concrete most of the way – where it ends at the shared border of Newport and HB.

The popular surf spot River Jetty, or RJs as it’s known, is at the terminus of this significant and important source of down coast sand replenishment.

Of late, some geniuses in the county works division have seemingly made two observations: Each winter significant amounts of sand builds up at the mouth of the river, as well as upstream for a few miles.

Both are seen as a problem that needed attention as potentially too much sand could impede high water flows during extreme rainy periods, which could then lead to flooding in the neighboring areas that are barely above sea level as it is.

The situation at the beach being that the river mouth can actually get closed off in the dryer summer month which starves the back estuary of fresh seawater on the twice-daily tide swing. The irony is that if the four jetties at the river mouth were never installed, there wouldn’t be a problem.

First, they decided to haul away and probably sell the sand deposited inland of PCH and all way up to 405 Freeway, which is a few miles. And, it’s not just any sand; it’s a top-quality aggregate for making concrete and they literally just drive the trucks in and scoop it up.

Second, they transport the sand from the ocean side of PCH, via truck and pipe, down the beach to the historically sand staved groin field from 28th to 56th streets, as well as in front of the parking lot adjacent to the Balboa Pier, a few miles further to the south.

Some combination of this has happened every summer now for at least 3 years.

A very lazy calculation would estimate millions of cubic yards of sand have been removed from the natural down shore flow.

Yesterday, we noticed an Instagram post from a longtime Newport local, Ray Coder (@raybro-1980), who pointed this out with a few startling images.

One being that what was once a long stretch of semi-empty peaks on most swells had been transformed into a sandbar-less shorepound.

The other image Ray included was a sight that must be frightening to the owners of many multi-million dollar homes that are perched along the sand. That being, water from mostly normal wave action is now almost reaching these homes.

If you’ve ever been to say, Orange Street in Newps, which is right in Ray’s ‘hood, the beach is up to 200 yards wide in some places and we rarely if ever, saw anything like this over the last 50 years. Unless it was some rare “king tide” and/or huge surf situation.

We believe the science that tells us that sea levels are rising, for whatever reasons, but we also acknowledge that in this case our innocent meanderings up river might very well be adding to these problems.

This very same issue is being repeated all around the globe today: Man trying to impose his will on an ever-changing coastal hydroscape, which just doesn’t end well very often, if ever.

Ray has made it his mission to bring this issue to public attention but it will ultimately be up to all of us to do what we can to stop this madness both in Newport, and elsewhere.

Even if that means just a simple yearly donation to Surfrider. You can do that here.

In closing, we just wanted to add that surfers are in many ways the stewards of the coastal environment. We live and breath it so we are often the first to notice when things are getting out of whack, as Ray did.

It’s on us boys and girls.

Oh, one more thing. Being conscious about our environment is only political when we make it so.

Take Five: EP 26 The North Shore may never be the same.

Take Five: EP 25 It was a pretty good year at the movies

Take Five EP 24: Is it time for surfers to unite in the cause of ocean health?