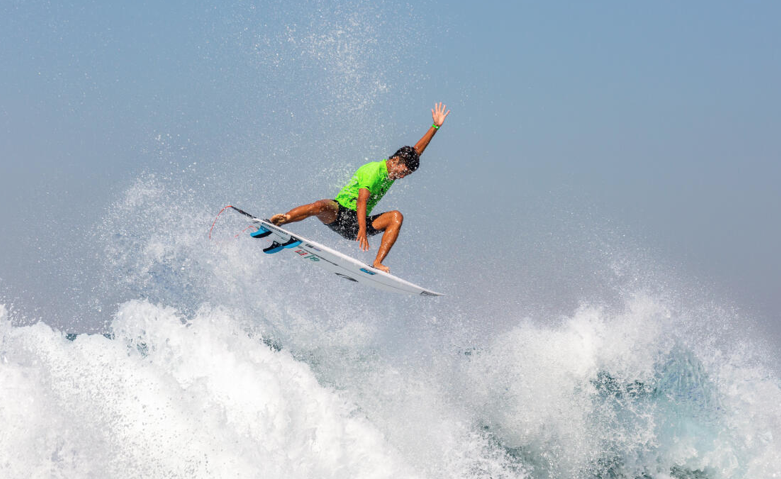 Given the consistent perfection of the surf in the Indonesian archipelago, it’s hard to believe that there haven’t been more surfers from that zone competing at the highest levels.

That said, when one drills down a bit further, we must note that it was only just a few decades ago when many Indonesians felt that surfing, or swimming in the ocean in general, was somewhat taboo and in turn, much too dangerous. That has slowly changed and if you’ve been there recently, well, let’s just say, the local crew is on it these days.

Naturally, with that new push came some very serious talent.

Although there were many others, a few years back the unofficial king of ‘Ulu, Rizal Tanjung, was the first Indonesian surfer that was truly internationally recognized. Bob Hurley spotted the lanky goofyfooter early on, signed him forthwith, and sent him around the world to some of the best waves on offer, all memorialized on film and video.

Although never a huge competitive threat, Rizal was truly one of Indo’s first surf stars.

But that’s about to change dramatically as a few days ago Rio Waida won the WSL Challenger Series Sydney event, and is now sitting in second on the rankings and well on his way to qualification to the 2023 WSL CT.

We don’t want to jinx anyone with an ‘early call’ but whether or not Rio makes it this year, or soon thereafter, the point being is that Indonesia is firmly on the map as a serious surf zone of which will surely be churning out great surfers into the near future.

As previously mentioned, we’ve been keeping an eye on Bronson Meydi, as well as many others, who have been busy taking apart everything that moves wave-wise.

That in mind, the future looks very bright for Indonesian surfers.